Adopting precision farming techniques is leading to a 1% a year increase in potato crop yields for one Dutch pioneer, by tackling problems such as soil compaction.

In the 6 years since farmer Jacob van den Borne adopted precision farming, he has come to the conclusion that the answer to poorer-performing parts of fields lies in the soil rather than in the crop.

Together with his brother, Jan, he runs an arable farm near the village of Reusel, close to the Belgian border. He crops almost 500ha of sandy soil, growing potatoes on rented land, with 50ha of sugar beet and some maize. 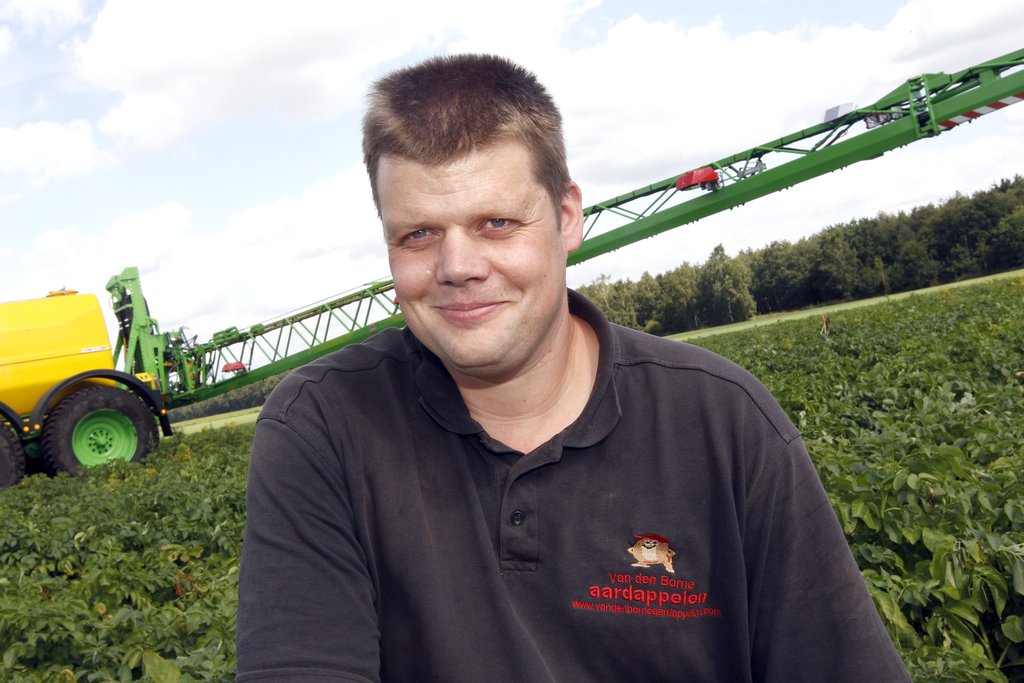 In 2006, the brothers took over the family farm from their father, Louis, and started experimenting with GPS technology. This included RTK guidance and GPS section control on the sprayer.

They had 4 years of experience using GPS auto-steer and had successfully slashed costs by eliminating overlaps from an average of 13% to 1%, saving fuel, fertiliser and pesticides.

It was the recognition that there was more potential for GPS, combined with the desire to raise yields that spurred them to adopt precision farming and to invest in crop biomass sensors Crop 1Circle, GreenSeeker and Fritzmeier Isaria.

At the time, they managed 400ha and it wasn’t possible to grow the area, so in order to increase production, they had to increase the yield a hectare.

6 years on and Mr van den Borne claims precision farming is raising crop yields by 1% each year and his early potatoes, lifted in July, averaged 40t/ha (99t/acre) and 65-70t/ha (161-173t/acre) for late varieties like Innovator.

He has based this claim on comparisons with a special reference area that is not being farmed using precision farming techniques. “Without reference plots it is impossible to say whether or not certain techniques have effect,” he explains. This additional yield could have been caused by the weather or new varieties.

Also in that time, he gained a good knowledge on how to interpret and use the data, as well as form a strong view on what precision farming is and is not.

He believes it is a combination of taking measures at the right time, in the right place and with the right application. “When one of these 3 elements is missing, it is not precision farming,” he says.

Early mistake: forgot about the effect of cultivations

However, precision farming didn’t immediately lead to success, admits Mr van den Borne. “The first few years I was on the wrong track. My first thought was that yield differences could be evened out by measuring the crop’s biomass during the growing season, and variably applying nitrogen fertiliser according to this.

“Although we were able to map all differences in crops, we were not able to improve weak spots.”

The self propelled 4-row AVR-harvester has weighing-cells to measure realtime the yield.

It turned out that he forgot about the most important element – the effect of cultivations.

However, last year, he realised that solving soil compaction would improve things rapidly.

Ground that has not been exposed to traffic gives an additional 6% yield, according to scientific research. Soil improvement is the ‘low-hanging fruit’ of precision farming, just like closing sections when spraying was the equivalent for GPS. In other words, relatively little effort can lead to substantial return.

Other measures, such as managing soil K and organic matter, are also profitable, but margins are low, while it costs a lot of effort. For Mr van den Borne, this was reason enough to change his operations and embrace the permanent tramline system.

In 2016 Jacob van de Borne experimented with a selfpropelled 8-row planter. This year he is returning to a regular tractor on double rowcrop-tyres, zo the potatoes are planted is loose grond.

Fixed lanes are used in Dutch organic farming, but arable farmers do not want to adjust all tractors to a track width of 3 m, as this is too wide for the road when travelling to outlying fields. This is especially true for Mr van den Borne as he farms 140 separate fields.

He instead opted for permanent tramlines at a standard track width, with a practical working width of 6 m. He is also looking to reduce compaction with tyre technology.

In recent years the tractor in front of the planter was on large low-pressure tyres. Last year, he experimented with an eight-row self-propelled potato harvester on wide tyres. Now the harvester is on twin wheels with a large distance between the tyres, both front and back, to prevent the tubers from being planted in pressed soil.

Knowledge of soil basics is being lost

Another learning point from his precision farming journey is how many skills have been lost in the new generation of farmers. “Some older growers scornfully say to me: ‘My yield is higher than yours despite you using precision farming techniques.’ And they are right about that.”

Mr van den Borne believes the pitfall of his generation is the lack of knowledge on the basics of plant cultivation and managing soil.

Fertiliser standards were high, leading to sufficient yields. As a result, farmers who are younger than 45 have lost the real skill of managing soil. He also blames education, as 40 years ago, students were taught about fertilising, cultivations and growth models.

His generation were taught how to successfully build a network, and acquire knowledge with experts. But almost all real subject specialists are retired now. However, ‘old hands in the trade’ still know how to cultivate. “My grandfather, for instance, knew exactly what needed to be done when there was a problem on the land.”

See also: US contractor makes more efficient use of nitrogen

Mr van den Borne concludes that precision farming is nothing more than a modern way of mastering the skills of cultivation. “That is actually what I am learning again, by analysing data, trying to solve problems and embed it in our business.”

The centre will conduct trials for third parties such as agchem suppliers and monitor plots using drones and tractor-mounted sensors. Mr van den Borne has hired an analyst who will analyse and interpret the data.

The practice centre is also linking with colleges to help give students some insights in precision agriculture. By educating students, he hopes to speed up the adoption of precision farming in the Dutch agriculture sector.

Who is afraid of autonomous tractors?

The Autonomous Wizard of Oz blog Part 3: Why farm equipment still isn’t keeping up with technology